There is a certain irony in the BBC having to report on the accusations of plagiarism being levelled against it. Most advertisers on the receiving end of threats of IP infringement are anxious to guard against reputational damage and will do everything possible to avoid giving such allegations the oxygen of publicity. But not the BBC. They have to report it. Ouch, that’s harsh.

The facts, as report by the BBC, are these. BBC Sport has launched its #changethegame campaign to highlight live women’s sport being shown on the BBC across various platforms. The campaign includes a poster with a picture of Dina Asher-Smith, the leading female British sprinter with the headline “Slay in Your Lane”.

Cue accusations of plagiarism by Yomi Adegoke, co-author (with Elizabeth Uviebiene) of “Slay in Your Lane: The Black Girl Bible”, which discusses how being black and female affects various aspects of life. She has accused the BBC of trying to “piggyback off our tiny brand’s movement” by using the line in conjunction with the image of Ms Asher-Smith, who is also black.

It transpires that there is a trade mark registration for ‘Slay in Your Lane” covering a truly astonishingly wide specification of goods and services, in class 25 from adhesive bras to zoot suits via galoshes and turbans; and in class 35 from accountancy advice to xerography (no, me neither). But not, alas, from Ms Adegoke’s point of view, in class 41 covering broadcasting services.

Still, no matter. Despite her reported hatred for public spectacles, Ms Adegoke tweeted about the BBC’s egregious behaviour, thereby securing a huge amount of free publicity for both her book and indeed her “tiny brand’s movement”.

The BBC has denied any legal liability and indeed its response suggests that trademark searches were conducted prior to the launch of the campaign, the BBC concluding that their use of the headline would not infringe the trademark. And rightly so, IMHO, as one might say on Twitter.

So, all’s well that ends well. The BBC successfully avoids an action for trademark infringement and Yomi gets a slew of free publicity for her book and her ‘movement’. If only the BBC would stop publishing these damaging stories about its own plagiarism. Or lack thereof.

Adegoke said the BBC had "arrogantly assumed" the authors had not trademarked the name of their novel and "that we would for some reason be grateful at this plagiarism disguised as a nod". 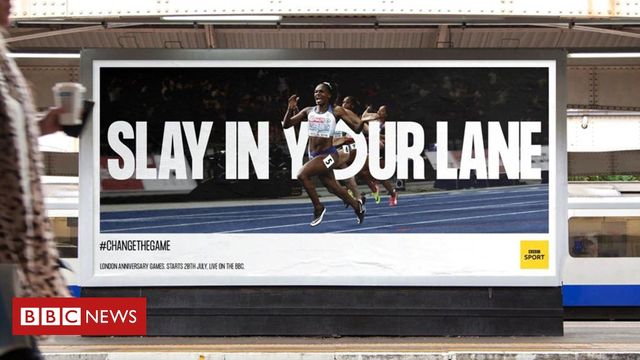